Two days ago, a man showed up at my childhood home, about 30 minutes north of where I'm living now, carrying a small box. My mother answered the door and the person introduced himself and said he had something for me, and that once I opened it, I would understand. 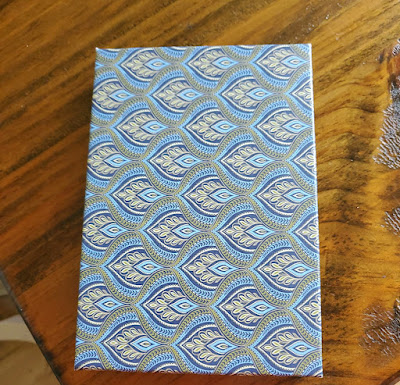 After he left, my mother called me and asked if I remembered a kid named Pete. I said that I did, and that's when she told me that he dropped something off for me. I haven't seen or heard from him since we were kids, so I had no idea what he had left for me. Not knowing the size of the box, my first thought was maybe it was his baseball card collection he was giving me. I did remember that we both collected cards as kids. I nixed that idea because I figured he probably had kids of his own by now, so why wouldn't he just pass them down to his own child/children?

Curiosity got the best of me, so I asked my mom to call me back via video chat so that I could see the contents of this mysterious box. My mom calls me back and shows me the box and I see it's the size of a small gift box. Certainly not big enough for a person's collection. My mom opens the box and this is laying right on top. 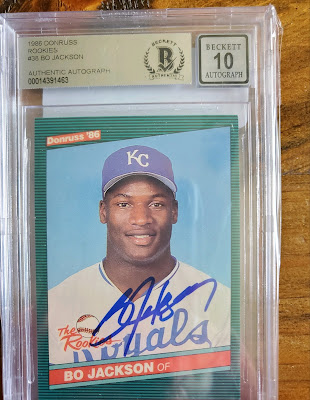 An authentic Bo Jackson signed rookie card. I was shocked and confused. Not a cheap item by any means, so why would someone that I haven't seen or heard from in 30 years gift me a card like this?

An envelope with my name on it was also in the box. My mom asked if I wanted her to open and read it and I said, "yes." She then reads me the following note. 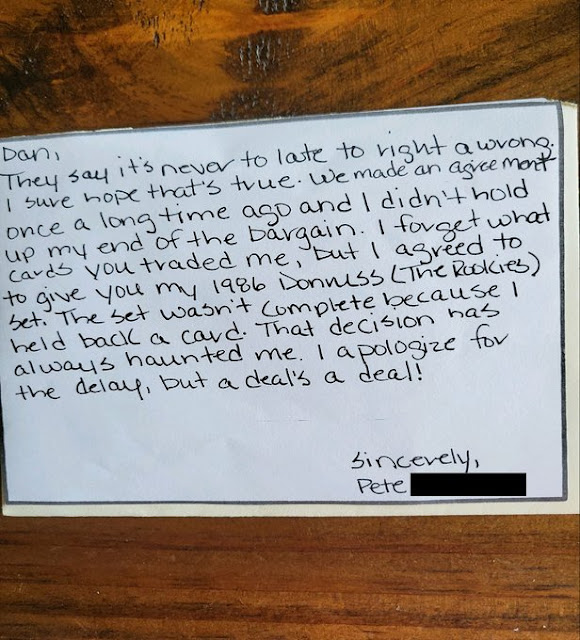 I immediately felt sad that he had such guilt over this trade. I have no recollection of ever being ripped off in a trade. I do not remember this particular trade at all. Yet, this seems to have been on his mind for over 30 years. Did I pester him every time I saw him, asking "where's my Bo?" Did I tell people to never trust him? Did I threaten to have him beaten up? Did I even open the set and notice that the Bo was missing? I have zero memories of this trade.

I do feel grateful that he thought of me all these years later and kept his end of the deal, even if I had forgotten all about it.

I looked him up online and discovered that he works less than 4 miles from my home. I called the phone number on his contact page and got his voicemail. I left a very thankful message, without mentioning that I didn't remember the trade. I left my number, asking him to call me but I have yet to hear from him.

This morning my mom visited me, bringing me the box and its contents. The Bo Jackson card is now in my possession. 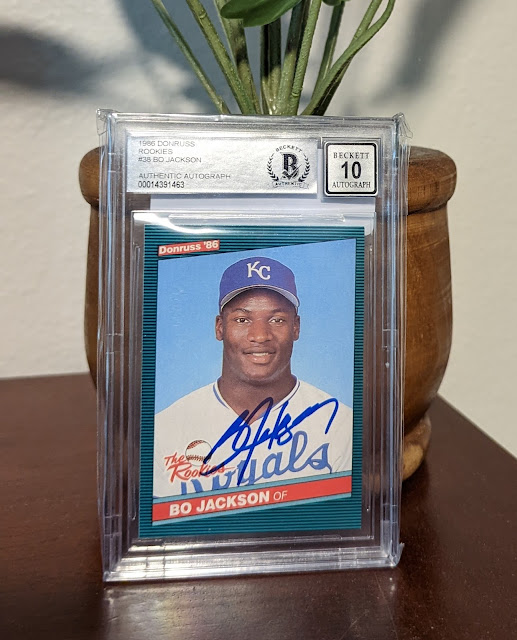 Pete, if you ever come across this, I just want to say thanks. I also want to apologize if I caused you any grief over this.