I've showcased this box in a previous blog post. 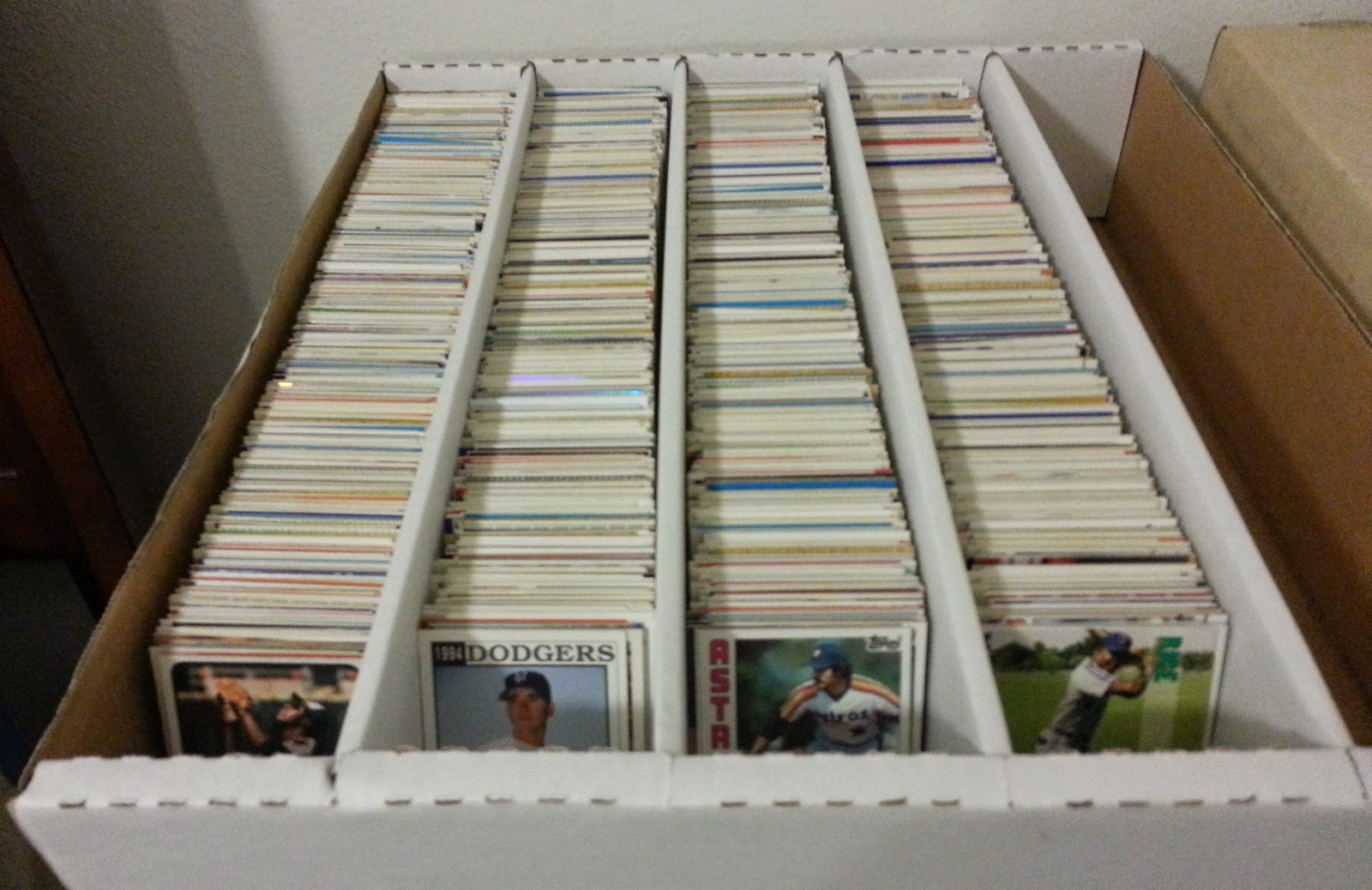 It contains one single baseball card of every player that I have never gotten an autograph from.
Every time I buy a pack of cards, I'm constantly adding to this box. Either adding a new player or replacing a card with a better looking one.

When I go to baseball games, I look up the rosters and then head to this box to see if I have cards to bring.

This week I made things much easier for me. I now have a digital list of my collection.

It took me a few days, but now instead of looking through the box, I can check my list from my computer, phone, tablet, etc... Making things much quicker when searching.

While going through all those cards and typing each name individually, I'd occasionally stop to Google a player and see what they're up to now or even if they were still living.

Sadly, I ended up pulling a decent sized stack of cards of players no longer with us.

I'm sure there are several more that I've missed.

Also in that box were two cards of players that I doubt I will ever get autographed, nor would I want to. 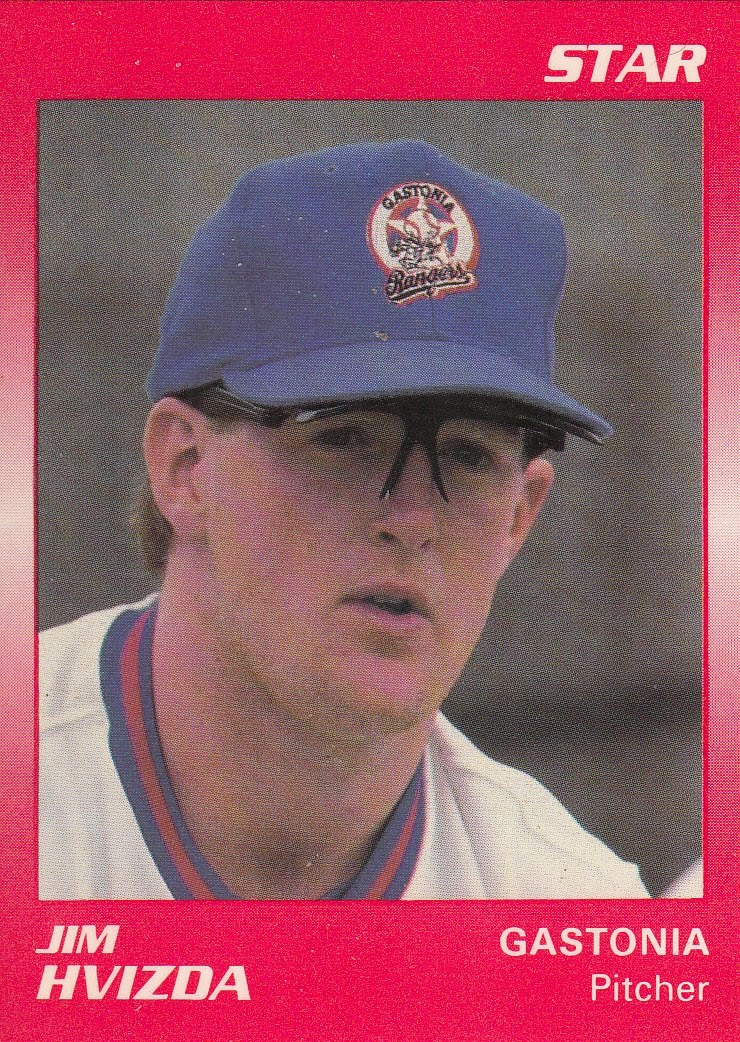 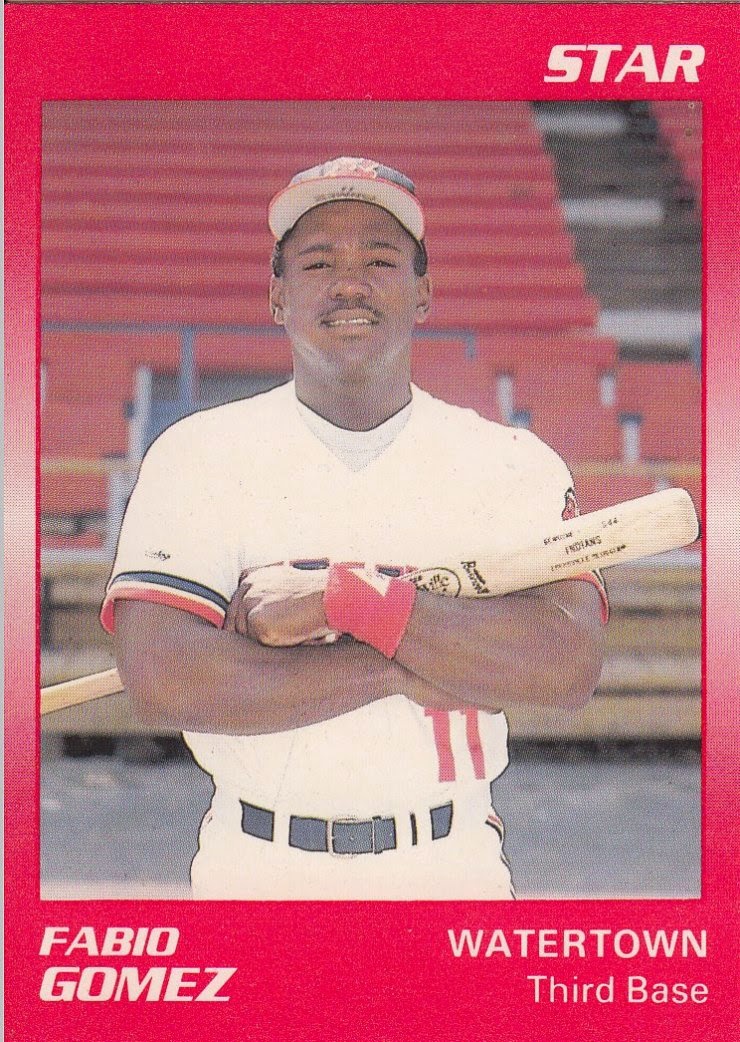 In 1999, Fabio raped and murdered his female neighbor, then dumped her body in his apartment complex dumpster. He is currently in an Arizona prison.

In 2012, Jim stabbed his wife to death in a Wawa parking lot, where she worked. He is in a Pennsylvania prison.

Pretty ironic that Star produced cards of both of these players for their 1989 Minor League set.

Hey, Star! You're supposed to make cards of prospects, not suspects.
Posted by Dan at 10:30 PM No comments: 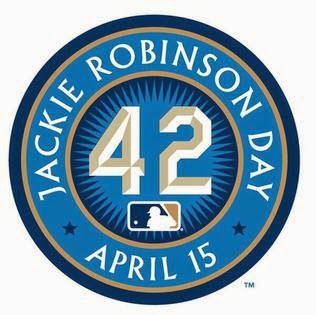 Do I Have a Legg to Stand On?

Saturday night I attended the Clearwater Threshers (Philadelphia Phillies Advanced-A team in the Florida State League) game against the Dunedin Blue Jays.
When you enter Bright House Field, ushers greet you and hand you a free program called Threshers Times. 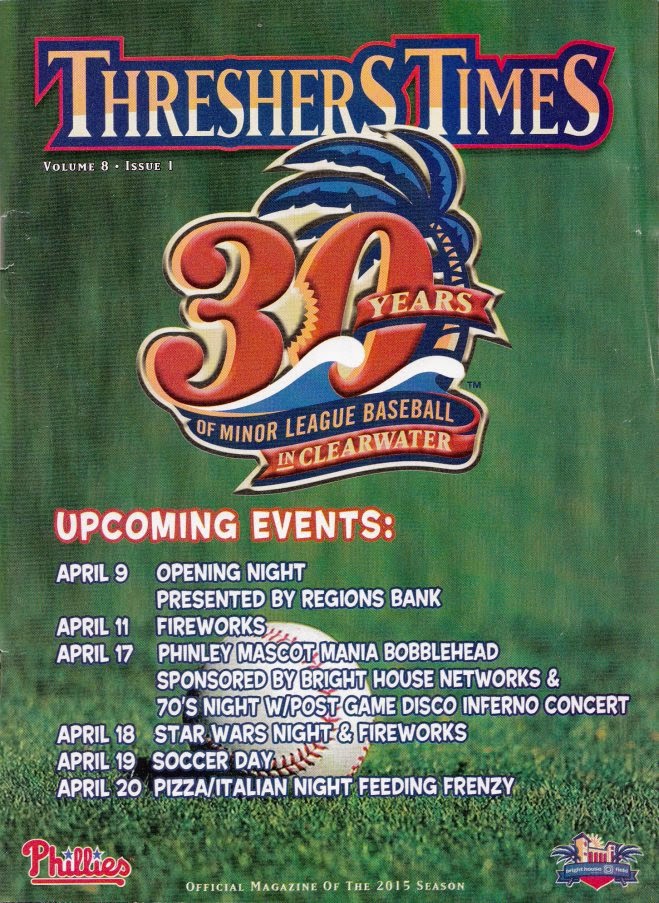 It's a monthly magazine, issued throughout the season.
When I saw page 12, a brief bio on the new Threshers manager, Greg Legg, I immediately recognized one of the images. 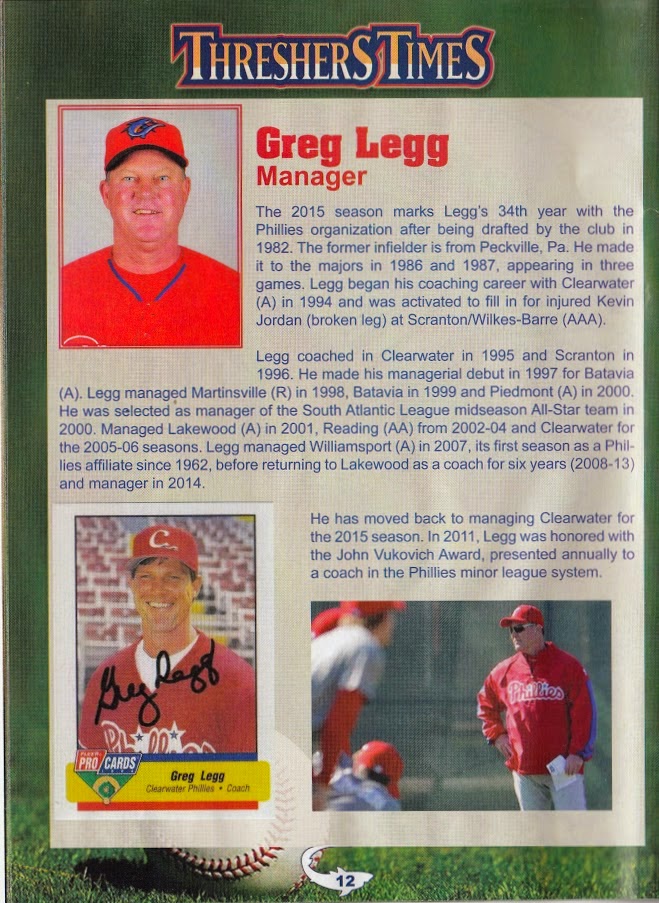 As soon as I saw that autographed baseball card on that page, I said to my brother, "that's my card!" I then quickly skimmed the article, hoping I or my website was given credit. Unfortunately, it wasn't.

I'm sure Greg Legg has signed hundreds of those baseball cards, but I am 100% convinced that that particular card was taken from my website. 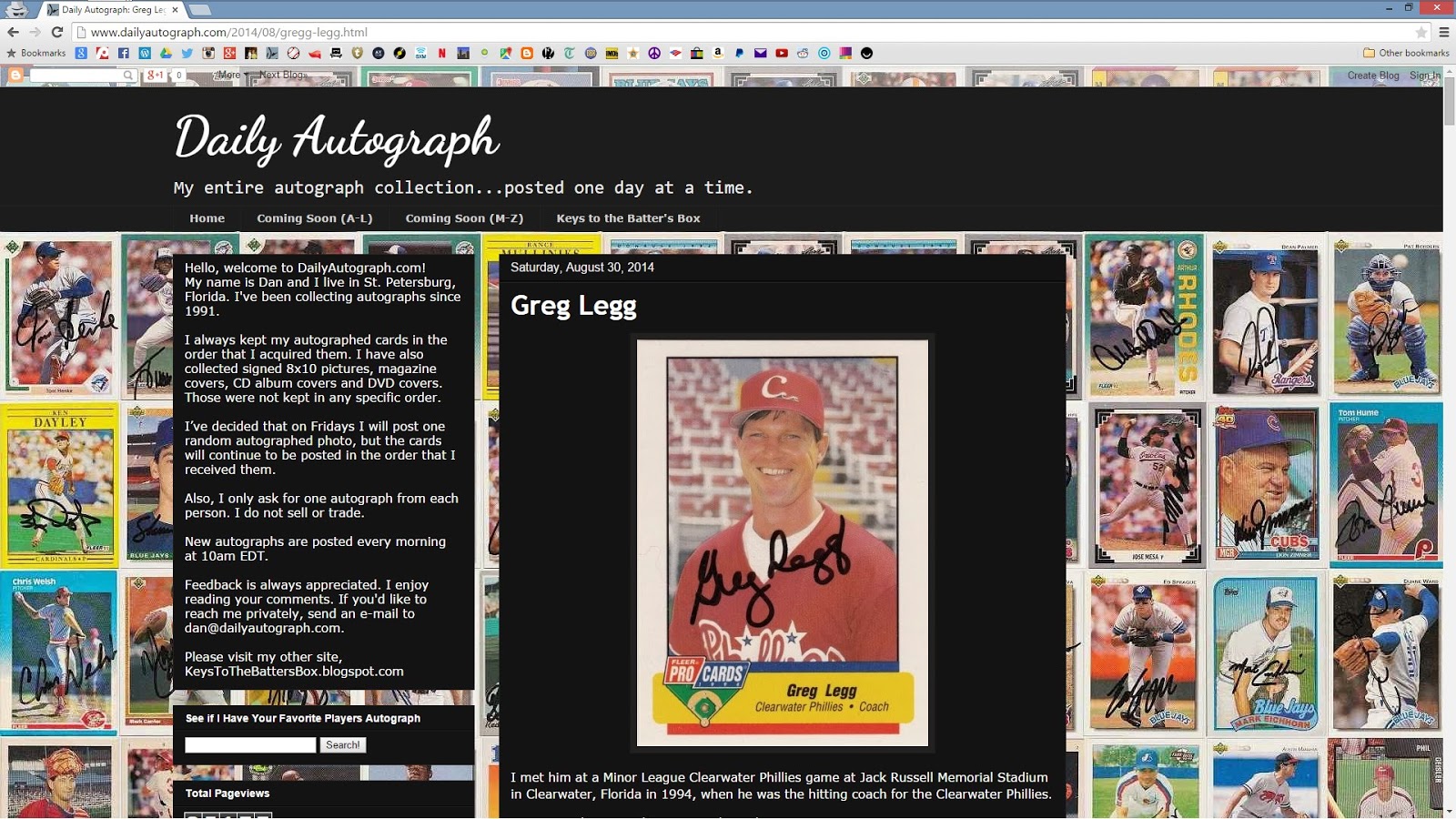 I'm not mad at the Threshers. I mean, there's no way I can prove that they used my image, but I'm sure anyone reading this would agree that it's mine.
I'm actually flattered by it, I just wish I was given credit for it.
Posted by Dan at 1:52 AM 1 comment:

The End of Spring

Today is the official last day of spring training in the Tampa Bay area, as the Pittsburgh Pirates wrap up their camp in Bradenton, Florida. Bradenton is a bit of a drive from where I live in St. Petersburg, so I primarily visit the Philadelphia Phillies in Clearwater and the Toronto Blue Jays in Dunedin.
Yesterday, the Blue Jays held their final camp, so I went down to watch. I was surprised to see that Aaron Sanchez, the Blue Jays 5th starter, would be pitching in a Minor League  game. Also in attendance was Marcus Stroman, in a full leg brace after tearing his ACL 3 weeks ago.

I ended up finishing the spring with 6 more autographs to add to my collection. 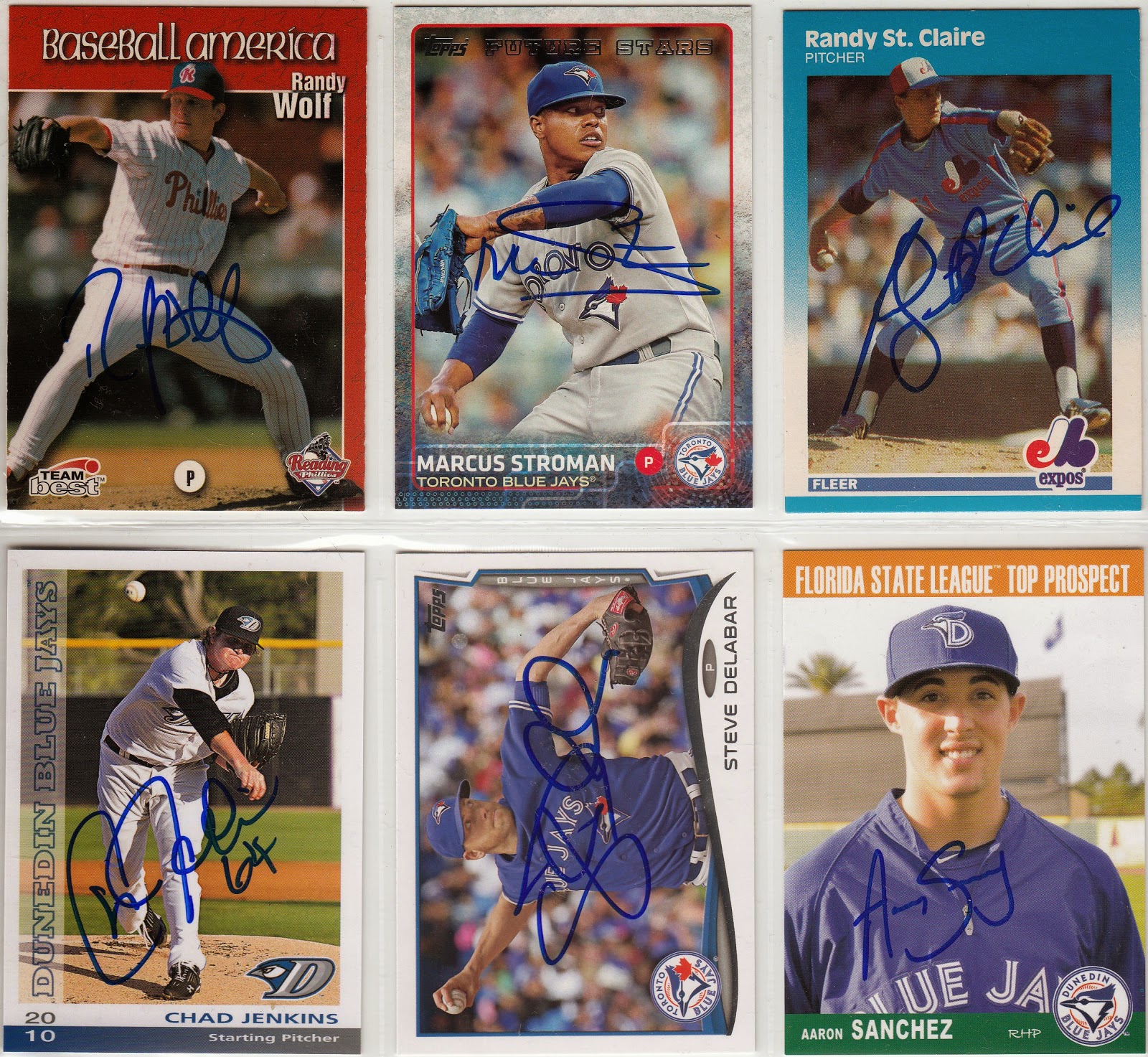 Prior to this spring, the last time I collected autographs at spring training games was 16 years ago.

I only got back into collecting last summer when I attended some Florida State League Minor League games as well as a few Tampa Bay Rays games. That summer I accumulated 21 signatures. This spring I added 73 more.

Here they all are in the order that I acquired them. 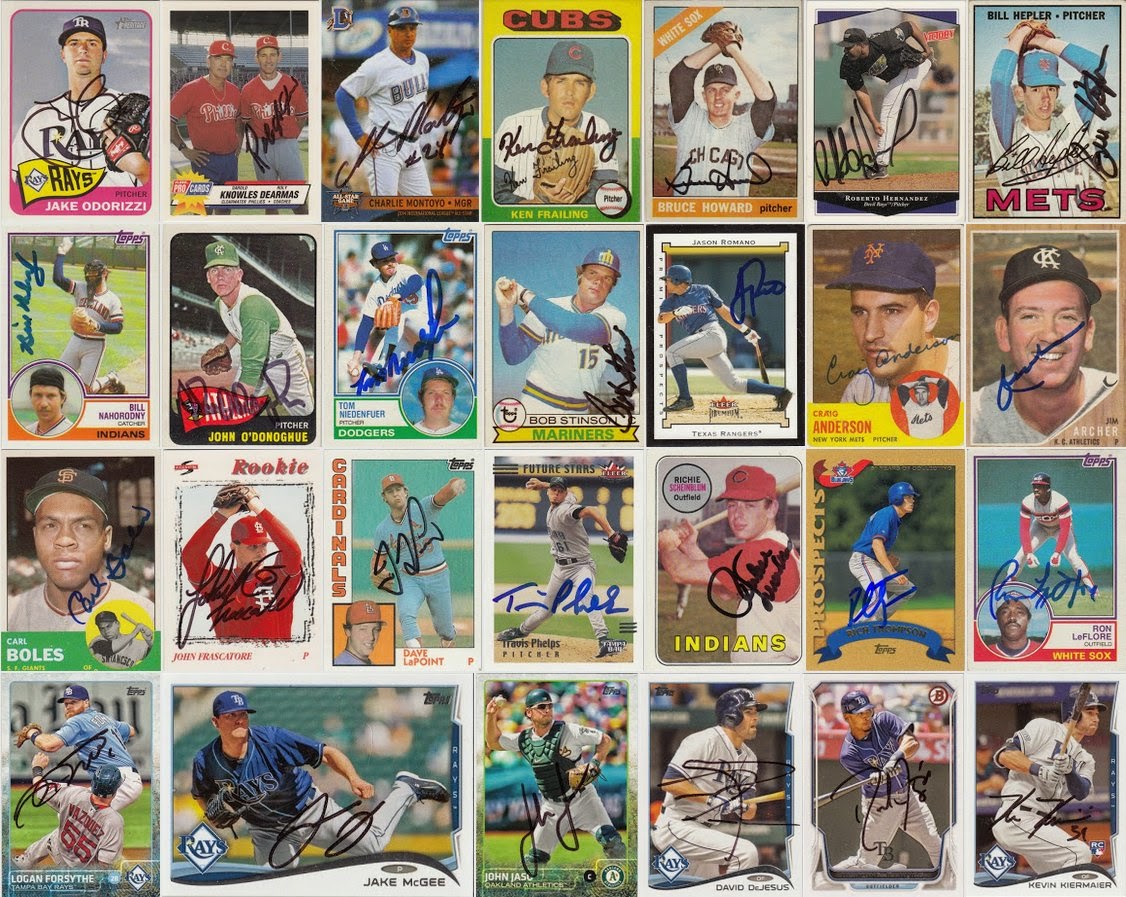 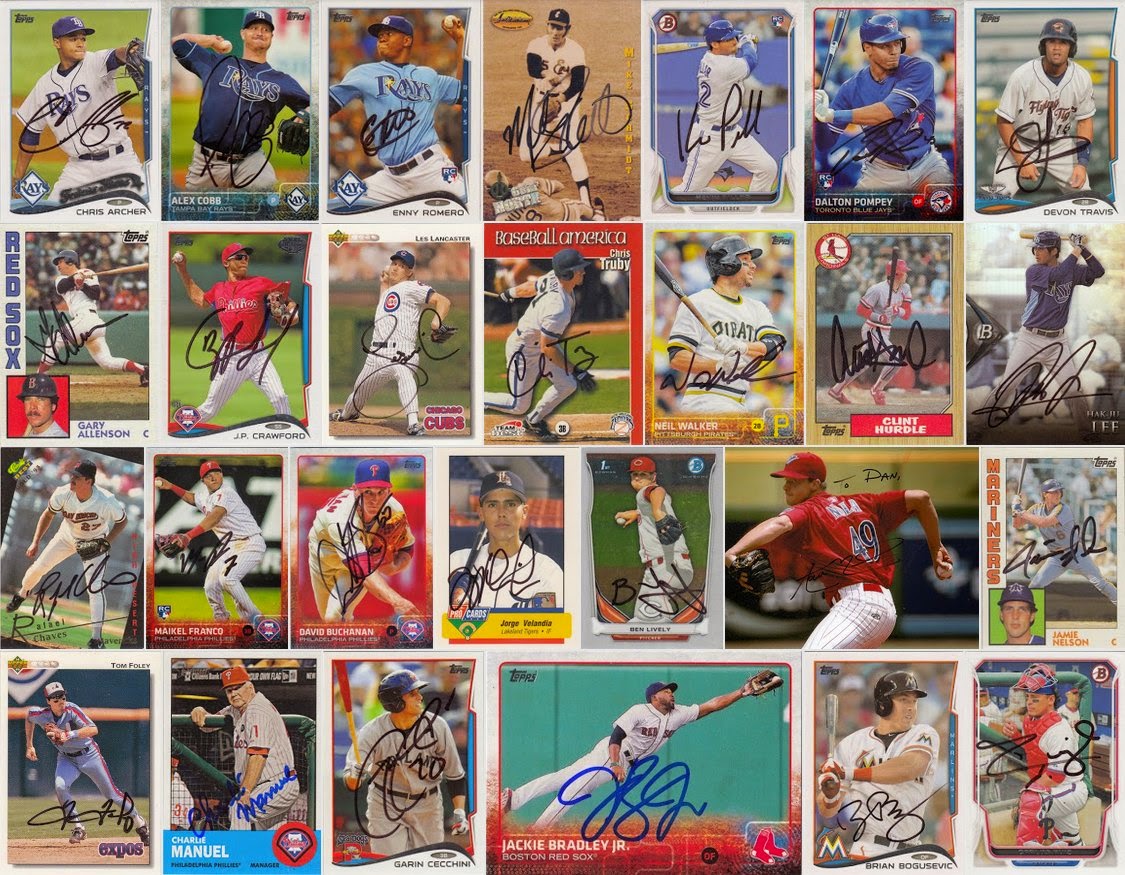 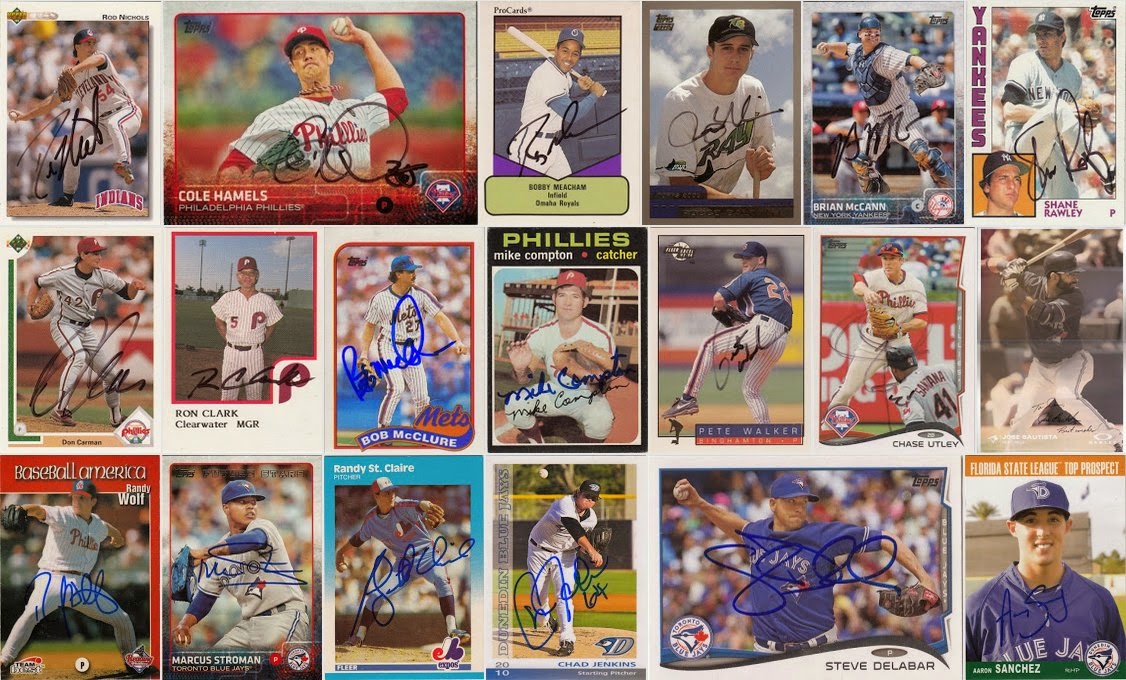 Not too bad for someone who's been away from the hobby for so long.