The Junior Junkie is asking card collectors to post their 9 favorite cards.

When I started this hobby in 1984, my policy always quantity over quality. While my friends wanted higher dollar cards found in Current Card Prices magazine (yes, I collected before Beckett became the standard), I was focused on amassing as many New York Mets cards as possible.

In of collecting, I became obsessed with getting baseball cards signed. I'm just  a Hall of Famer's signature on a card as I am about getting a Minor League manager whose playing career topped out at AA. They're all equally special to me.
Having said that, you may find my 9 kind of boring, yet, also unique. I decided to do something different with my nine cards. I based mine on defensive positions.
One favorite card for each of the nine positions on a baseball diamond. 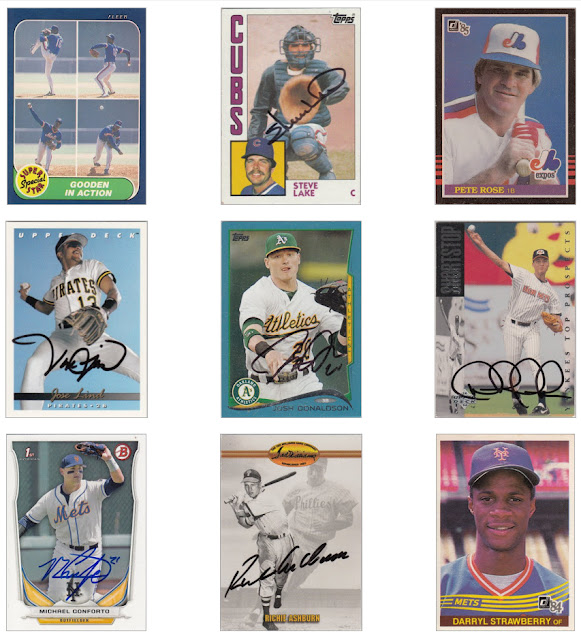 And now, an explanation for why I chose each of these cards. 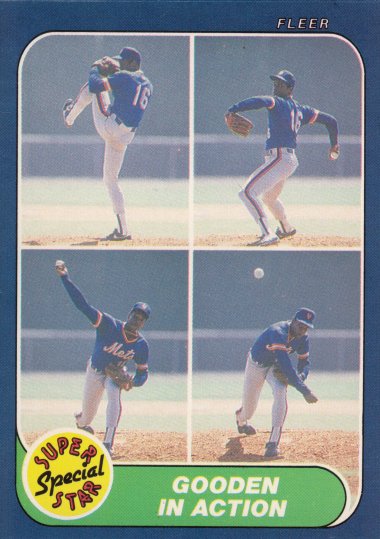 P - Dwight Gooden (1986 Fleer) - In the 80's Gooden was one of the most dominant pitchers of that decade. It was a really cool concept for Fleer to show Gooden's pitching motion on one card. Plus, as a 12-year-old, this card became an instant favorite. 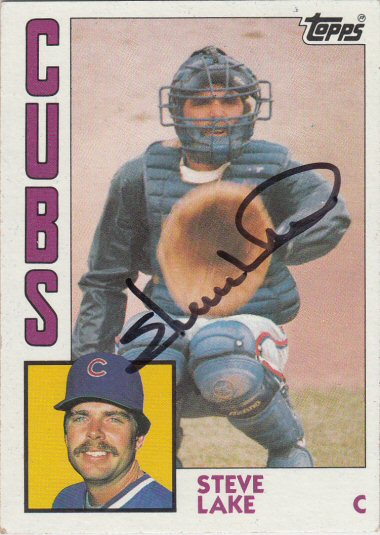 C - Steve Lake (1984 Topps) - This set was my first exposure to baseball cards. When I was 10-years-old and able to venture out with my friends to the nearby 7-11 convenience store, I discovered packs of baseball cards mixed in between the various candy bars for sale. I spent that multiple trips to that store buying several packs. This particular stood out to me. I loved that pose. I remember hanging the card on a bulletin board in my bedroom, I liked it that much. About 10 years later, I was lucky enough to meet Steve Lake while he was employed by the Philadelphia Phillies. It was truly a thrill to meet him and get this card signed. 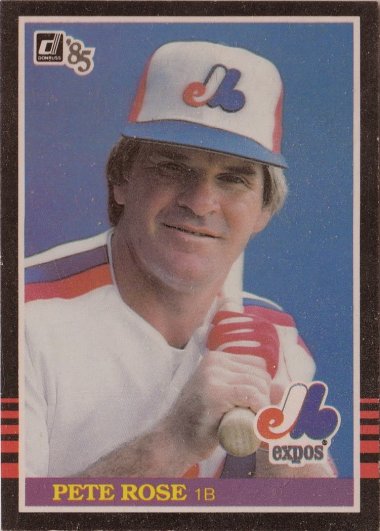 1B - Pete Rose (1985 Donruss) - He wasn't yet the Hit King when this card came out, but he would become it that same year. A mere pit stop in Montreal for the 1984 season was long enough for Donruss to capture this card of Rose as an Expos player. Maybe it was because I was so used to seeing him in Red, as both a player for the Reds and Phillies, but this card just fascinated me, and still does. 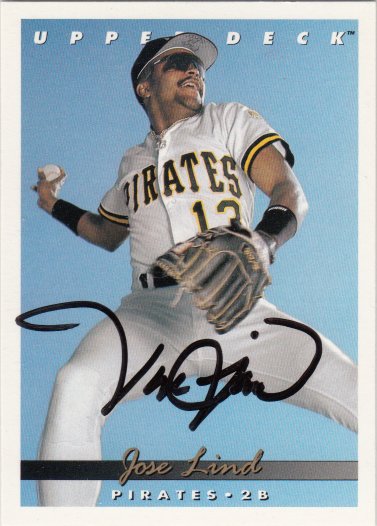 2B - Jose Lind (1993 Upper Deck) - Upper Deck made collecting so much fun with their great photography. Getting this card signed was pretty cool. A nice faux-action shot set against a clear blue sky. 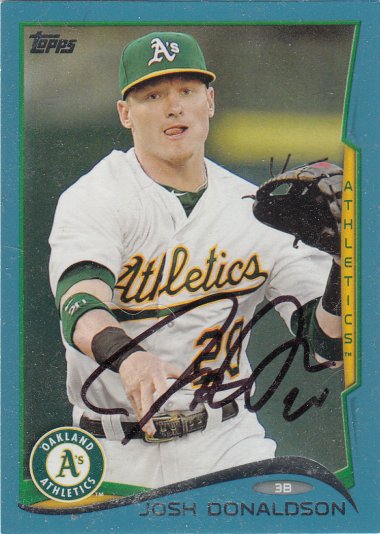 3B - Josh Donaldson (2014 Topps) - I'll be completely honest with you, last year at this time, I had no idea who Josh Donaldson was. I'm a Mets fan, I only watch Mets games. I don't watch baseball highlight shows or pay attention to other teams. After years away from the hobby, I started buying cards again in 2014. When I pulled this card from a pack, I was confused as to why the border wasn't white like all of the other cards in the packs I was opening. Anyway, last December, less than 2 weeks after he was traded to the Blue Jays, Josh participated in a whiffle ball tournament near my home. When I saw the list of participants, I thought I was going to be seeing the Pirates infielder, Josh Harrison. It wasn't until I was getting my cards ready that I had the 2 players confused. I thought to myself, "great, I get to get this ugly blue card signed by someone I never heard of."
Well, let's just say that I'm very familiar with Josh Donaldson now. You see, when I get an autograph of a player, I like to follow their career and see how they're doing. Josh ended up being the American League MVP. I also figured out why the border was different. I've learned a lot since then. 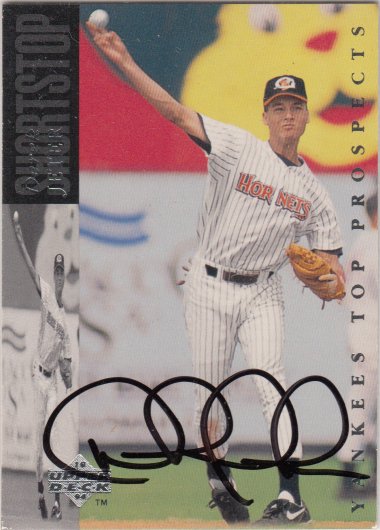 SS - Derek Jeter (1995 Upper Deck Minor League) - Since 1992, Derek had been on my radar. I was a subscriber to Baseball America and remember seeing his name pop up in various articles. I was so happy when he was finally sent to the Florida State League to play for the Tampa Yankees. Although his stay was brief that season, I was able to see him play live and get an autograph that same day. 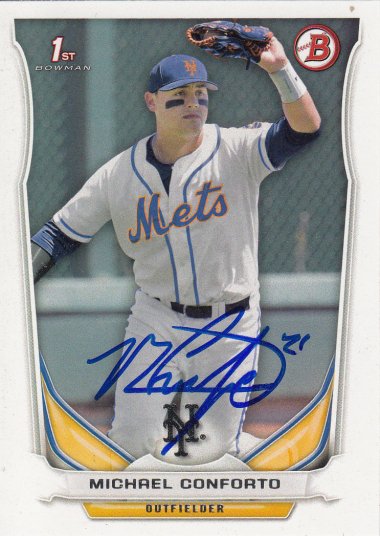 LF - Michael Conforto (2014 Bowman Draft) - Much like Derek Jeter's stay in the FSL, Conforto's was equally as short when he played in the league this year for the St. Lucie Mets. I was paying close attention to his stats and just looking at the schedule, knowing that St. Lucie wouldn't be traveling to my proximity until the middle of May. I was sure that he'd be promoted by then. I remember reading a scout's opinion of him a month into the season, "why is he still in this league?" Lucky for me, he was still with St. Lucie when they visited the Dunedin Blue Jays. A few days later he was promoted to AA. Whew! What a year for this guy. He ends up bypassing AAA and earning own position in left field for the Major League team. 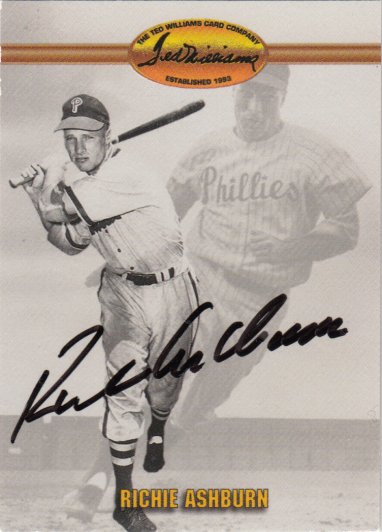 CF - Richie Ashburn (1993 Ted Williams) - I really liked this set. The design was classy and it showcased some great players that I never had cards of. This was the first card that I ever got signed from this set. At the time, Richie had yet to inducted into the Hall of Fame. So, it was nice that he eventually was enshrined in Cooperstown, and it's not a bad first card to get signed. I've added 11 since then. 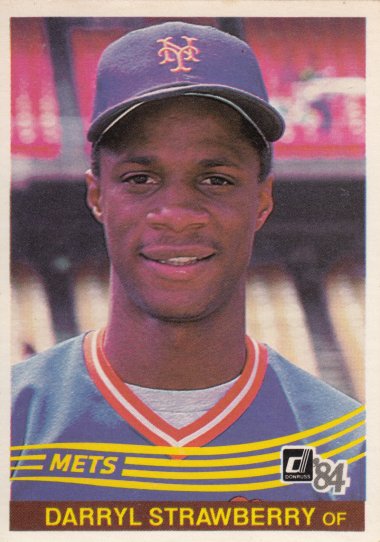 RF - Darryl Strawberry (1984 Donruss) - Probably my all-time favorite baseball card set. Of course, my favorite player is going to land a spot in my 9. This card was so expensive to me when I was a kid. I don't remember how I ever obtained it, but I'm sure I forked over many cards in trade to get it.

Well, there you have it, my favorite starting 9 baseball cards.
Posted by Dan at 11:28 PM 4 comments: