I've seemed to have neglected posting here after the succession of soccer related posts, but I have just been busy going to spring training games this month.
So far this spring I have gotten 79 different cards signed. Well, actually, make that 78½.

I went to the Phillies Minor League complex today to see the AAA and AA Phillies host the AAA and AA Pittsburgh Pirates. Unfortunately, the teams decided to switch the schedule, and instead it was the A ball teams playing each other, while the AAA and AA Phillies traveled to Bradenton to play the Pirates at their home complex. I didn't have many cards of the lower level guys, so it was a little disappointing to show up not knowing things had changed.

However, I did have a card that I was excited to get signed. The man in charge of the Phillies player development, Joe Jordan. Joe played one professional season in 1985 with the Everett Giants. He was there long enough to have a baseball card made of him. It took me quite a while to track down, but I was finally able to acquire it. I just chose the wrong day to try to get it signed.
All spring, the weather has been in the 70's/80's, shorts and t-shirt weather. Today was different, it was very cold and extremely windy.

The Joe Jordan card is not made of your typical card stock. It's small and almost feels like a magazine page. Since it was small, I felt that if Joe signed it, he should probably use a hard surface to keep it on. So, what I did was had the card sticking out of the nine-pocket page when I called Joe over. Joe got a laugh at seeing the card and one of the Phillies coaches got an even bigger laugh when he took a look at it. Sadly, Joe never fully pulled the card out of the page when he signed it, so a portion of his signature is on the page itself. 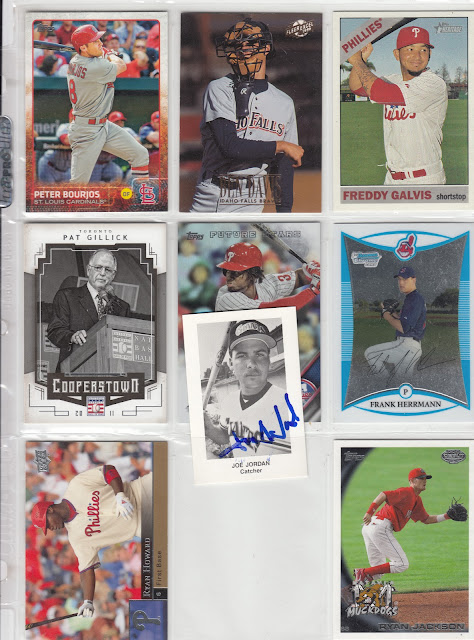 Here's a closer look at the card in the page. 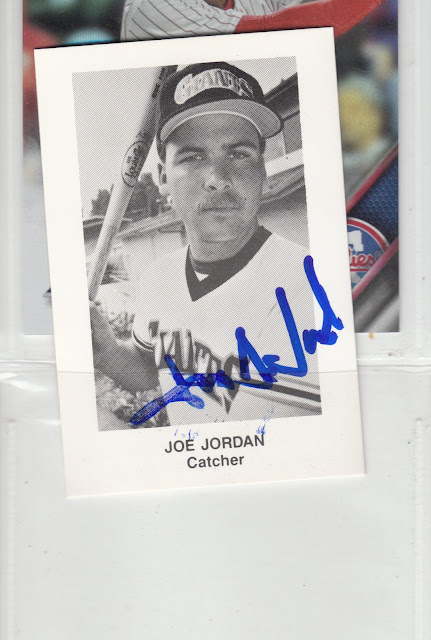 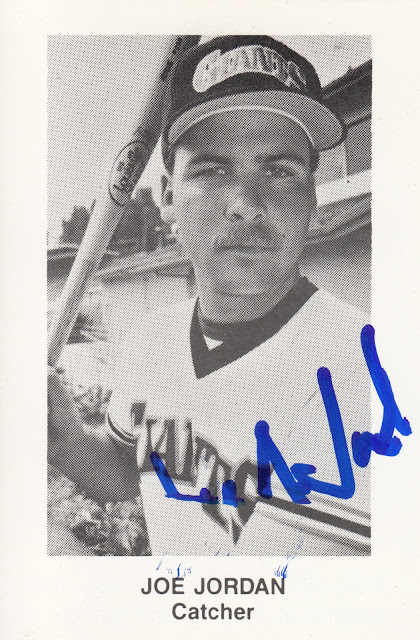 Kind of comical and just makes this autograph experience even more unique.
Posted by Dan at 10:13 PM 4 comments: